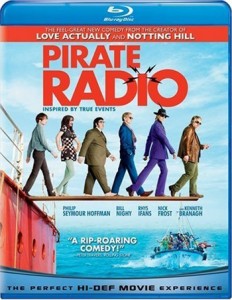 I finally got around to seeing this hidden gem of a film about an era of rock music when it was truly anti-establishment, but supported by the masses.

It is hard to say who holds the lead role in Pirate Radio,

but my favorites were definitely Phillip Seymour Hoffman as The Count (a late night rock jock who spins the latest in counter culture 60’s rock) or Bill Nighy as Quentin the eccentric owner of the literal ship that the pirate station is based out of in the North Sea off the coast of England. There were so many other character greats, such as Chris O’Dowd (also from The IT Crowd television show) as Simple Simon an early version of a comedy shock jock, and Katherine Parkinson as Felicity, the lesbian cook who runs the kitchen and keeps all the eternally juvenile boys fed and healthy.

The film was written and directed by Richard Curtis and is described on IMDB as “A period comedy about an illegal radio station in the North Sea in the 1960s.” It cleverly presents the tumultuous battle between the will of the people, and the desire of certain governing parties to impose their morals on an entire country (for their own good of course).

Phillip Seymour Hoffman’s character is reminiscent of his performance as the jaded disc jocky in Almost Famous, and it was fun to see him perform a familiar role and expand it into full being.

The writing is witty, biting, and clever with the government character assigned to destroy pirate radio stations named Dominic Twatt. Many jokes were introduced around that little gem, and though you see them coming you just can’t wait for them every time.

Film / TVFunWhat in the World?

The soundtrack is killer, and how could they miss with a back catalog of all the hits from the 60’s. They cover the birth of rock with songs from the Beatles, to classic soul, to the beginnings of glam with some poignant songs from The Rolling Stones and other greats. Thankfully they got the licensing to use many of the originals as not including them would have hurt the feel of the film.

Music VideosTrack of the Week

The Marias – Calling You Back

Track of the Week

Gene Dante – “Little Belle” is Like Spring in NYC

The Cult: We Own The Night Tour

Track of the Week

Zeen is a next generation WordPress theme. It’s powerful, beautifully designed and comes with everything you need to engage your visitors and increase conversions.